Larry Kagan (b. 1946, Germany) is an American sculptor who uses steel, cast light and shadow as a creative medium. Winding and welding a tangled web of steel wires, Kagan is able to “draw” with shadows. The focus of his work is not the abstract mass of wires he creates, but rather the shadows that emerge onto the wall when light is cast upon them. His subjects vary from figures to objects to animals and geometric planes.

Larry Kagan received a B.S. from Rensselaer Polytechnic Institute, and a M.A. in Studio Arts from the State University of New York at Albany. Kagan’s work has been exhibited nationally and internationally, and he is represented in numerous private and public collections, including the Flint Institute of the Arts, Flint, MI, the Butler Institute of American Art, Youngstown, OH, and the Norton Simon Museum, Pasadena, CA, to name a few. Most recently, Kagan’s work was featured at the Montclair Art Museum. 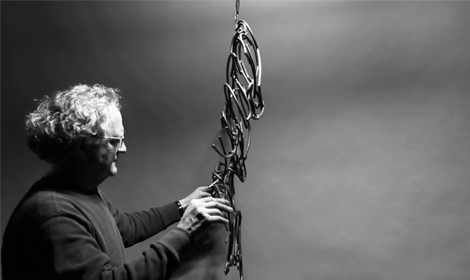