I was thinking about talking about one of my leading lady pianists today, but just read the following!

Njideka Akunyili Crosby was painting in her high-raftered studio in Los Angeles in early 2017, when she got the text from a friend. Just a few years earlier, she had been selling works for $3,000 a piece. Now, one of her paintings had just sold at Christie’s in London for $3 million, more than six times its estimate…

…Ms. Akunyili Crosby said she’s grateful for her success but wishes someone had taught her how to navigate the attention. She’s felt naively exploited at times. She’s skittish about showing in New York galleries after getting entangled in a legal dispute with one. Auctions are particularly nerve-racking. If bidders push up prices too quickly, her gallery may not be able to persuade new buyers to pay similarly high amounts. That can gut an artist’s price levels permanently.

She is getting savvier, learning ways to steer her works to buyers who might not resell them quickly for profits. But the ultimate control over her work and her career remains elusive.

Kelly Crow’s recent article in the Wall Street Journal about this young artist discusses a topic that I have been talking and lecturing about for forty years now, an occurrence that is now a very common travesty in the art world—speculation.

Almost immediately after I opened in SoHo in October 1973, the astounding and amazing Robert and Ethel Scull collection came to auction. For the first time in history, hammer prices for works by contemporary living artists were up 10 to 50 times what the artists had sold their works for just 10 years before. Everyone was talking about the extraordinary auction results and how much money the Sculls had made on their collection of Abstract and Pop Art.

SoHo was just getting into the art world’s consciousness with a couple dozen galleries (which would eventually grow to be 350 or so). There was an amazing confluence occurring. Interest in contemporary art was increasing, SoHo created a new and exciting centralization of galleries in a very accessible and interesting area, and NOW this was coupled with the VERY publicized indication that art may be a viable investment vehicle. 1973 saw a tremendous increase in traffic through our galleries as well as a major influx of new and established galleries opening grand spaces in this 16-square block area. SoHo included Castelli, Emmerich, Weber and Sonnabend and other internationally acclaimed dealers. We were actually overwhelmed with “collectors” and buyers.

For a number of reasons, my gallery and situation evolved to be somewhat different from just about all the other dealers. The first being that I had discovered and chosen to represent a new genre of painters—the Photorealists—who were able to produce a very limited amount of paintings annually, which in most cases amounted to no more than 3 or 4 works.

From the very beginning when my gallery was on Madison Avenue at 79th street, I was able to limit sales to those I felt really loved the work. I wanted to work with clients who would take the paintings home and LOOK at them. I was interested in clients who were obviously collecting as opposed to decorating (this was before the idea of investing was even thought about). These were people who enjoyed lengthy conversations and viewings, who sometimes stayed for hours in the gallery. It was a fun time for me and for them.

But THEN in 1973 things began to change and heat up. All sorts of people were now coming to the galleries looking for the next Warhol, Johns and Rauschenberg. They would come to a Bell or Flack show and say, “These are terrific, I want to buy them all!” That was truly scary….

Charles Bell, the leading post-modern, Photorealist still-life painter, created approximately 20 versions of his iconic oversized gumball machines. In the 70’s, these paintings sold for $2,000 to $30,000.

Since that time, only two paintings have ever hit the auction block as part of estate sales, and they sold for ten-fold their original cost.  However, no more emerged for sale from any collection where I placed them. Eventually, I managed to get a single European collector to part with his Bell gumball, so that it could be placed into the best collection I have worked on in the 21st century. Now, the gumball paintings are at the million dollar level and there are NO sellers!

I knew even then, that since there were going to be very few works by these artists that EVERY last one HAD to go to the right COLLECTORS. And collections spread around the country and world. These collectors were the ones who carefully sought out the artists they want to look at and were able to independently select their favorites in a show. They were the ones who would lend to museum shows when requested. They were the ones who would try to add another well selected painting every few years. These collectors were able to remember the name of the artist when they had visitors, and then enthusiastically discuss the art. AND, as years moved on, they were and are the ones who would probably donate these rare and loved works to museums for numerous reasons. None of these people would dump their paintings if the artists fell from favor, nor would they flip their works if a major price increase materialized.

A decade later in the high-rolling eighties, a new collecting scheme emerged. A number of dealers began to arrogantly and pretentiously create selective “waiting lists” to limit and determine WHO could buy an artist’s work. Most of the artists involved produced great amounts of work, and the tactic was used to raise prices quickly and focus on those who had lots of money. They were told and convinced of the investment and felt a sense of status and prestige for being “allowed” to buy one of the artists’ paintings.

The motivation of these dealers was totally different from the way I operated, which was to create legacy and art historical context for my chosen artists. In the case of the Photorealists, the supply is tiny, the prices have risen constantly and significantly, but steadily over the decades, and the market is remarkably stable. Very few collectors part with this art, and very few works hit the auctions or are even presented for private resale. The paintings are now being passed down to heirs or donated to museums. Only a few lesser works appear in public sales from time to time.

Consequently, Photorealism has largely evaded the current speculative market trend of “flipping” that was highly broadcast in spring 2014. The word “flipping” hit its highpoint when the tactic was publicized and highlighted in a number of articles about the entry into the “investment art world” by the actions of Stefan Simchowitz. Simchowitz spoke to the NY Times Magazine about the merits of flipping and on being a “Great Collector”. Simchowitz was eventually black-balled by the art world community, but this is not to say that he hasn’t continued to buy, and that the trend hasn’t continued with other collectors.

Nowadays, when people visiting the gallery ask about, or by their discussions indicate that, “investment” is in mind, I generally explain that the focus should ONLY be, “Do I like it, and can I afford it?” NO one can EVER tell a buyer that ANY work of art will appreciate in DOLLARS AND CENTS.

Maybe .001% will, but only the top and most astute professionals have the slightest chance of guessing correctly or actually profiting. And, for many of those, it is their heirs and estates which will benefit in the future. An amusing business point here is that when buying or selling a stock the commission is a fraction of a percent. When buying in real estate, the commission is in the low single digits. When buying art, the commissions are from 35 to over 50%, and when selling …they remain the same and are even over 30% at auction. Do the math and figure out if art can be considered an investment!

Over the past 4 decades, I have written four major volumes documenting most of the paintings by the Photorealists, as well as over a dozen other books, including monographs. I have helped expose these works to as many people as possible, by presenting over 250 museum exhibitions thorough the world, and I will continue to do business “my way”. 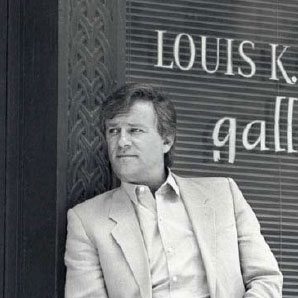